Written by Product Team
Updated over a week ago

This feature intends to help teachers quickly identify out-of-the-ordinary situations in teamwork assignments. This is based on how students rated themselves and their peers. Such situations can range from positive (like someone who performed exceptionally well) to a possible concern (like an apparent conflict between two students).

How to enable this feature 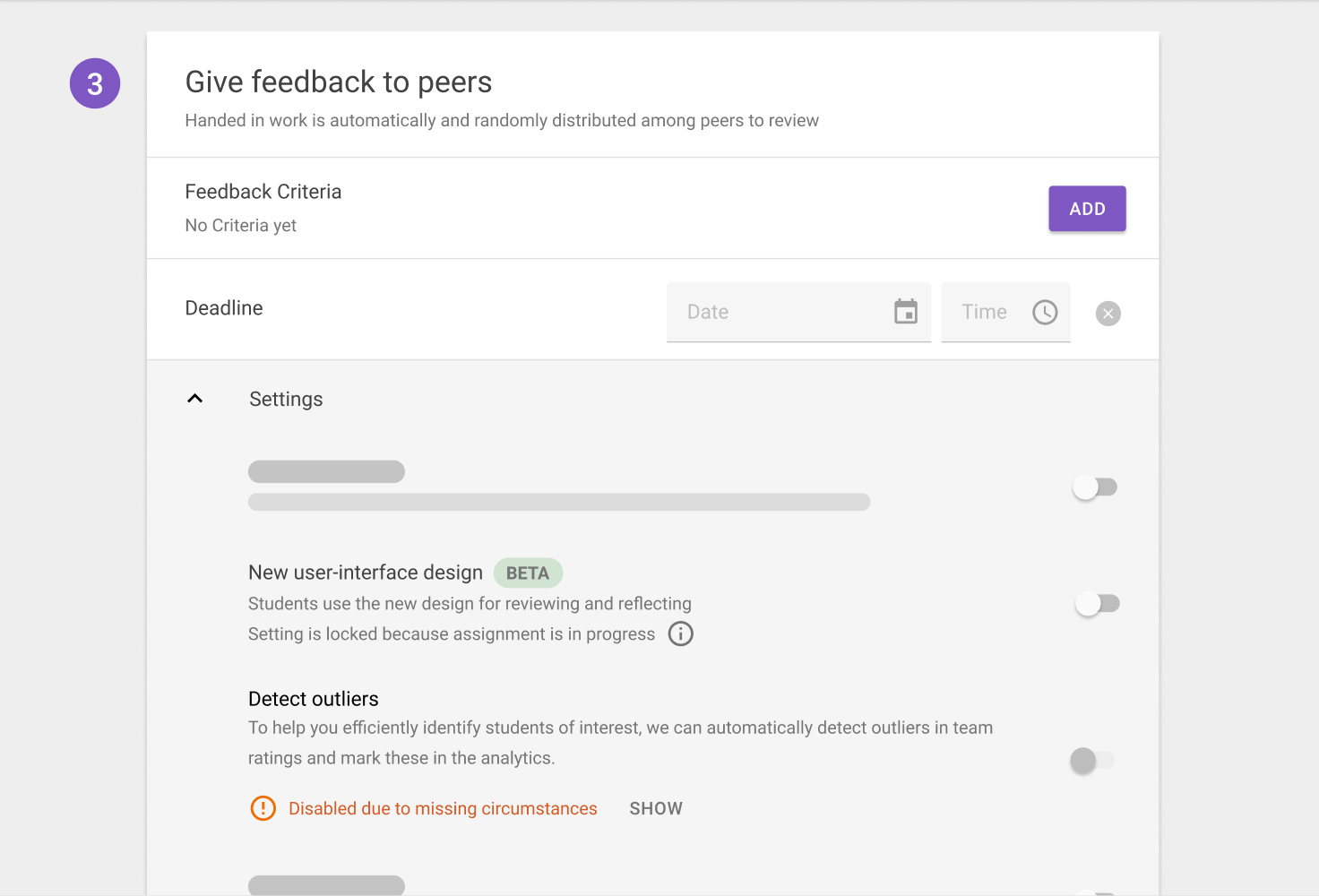 The feature can be enabled in the settings of "Task 3: Give feedback to peers". Currently, this feature requires the following conditions to be met:

We recommend using it for teamwork assignments only. We aim to provide a generalized version of this feature in Peer Review too.

How to ethically use this

One might rightfully wonder: "Does this label students and judge them?"

The short answer is: no. These labels are mere indicators of likely areas of interest. Judging students is not the intention of this feature. Though we call them "labels" for clarity and brevity, FeedbackFruits does not support or intent to engage in automated judgement of students. To think of these as definitive would be a mischaracterization of the feature. Let's clear up what this feature can and can't do:

This occurs when a student received an average rating higher than 70% and their rating was more than 10% percentage points higher than the overall average of the team as a whole.

This occurs when a student did not contribute to the team's success. This condition is triggered when their overall average rating is less than 50%.

This occurs when the overall team rating for a student is greater than 60%, but the student rated themselves at least 20% percentage points lower than this. This could indicate that the student is "underconfident" or too critical of their own contributions.

This occurs when the overall rating for a student is less than 60%, but the student rated themselves at least 20% percentage points higher than their average rating.

This occurs when a student appears to be trying to "skew the curve" by giving themselves high ratings while rating the other team members poorly. The student has given themselves an overall rating of 80% or higher, while rating all the other members on their team at least 40% percentage points below this rating (when rating more than 5 peers, we measure the difference using average)

This student rated a team-member at 40% or less while the median rating from the rest of the team is 60% or more. This generally indicates that there is a conflict between 2 team members. 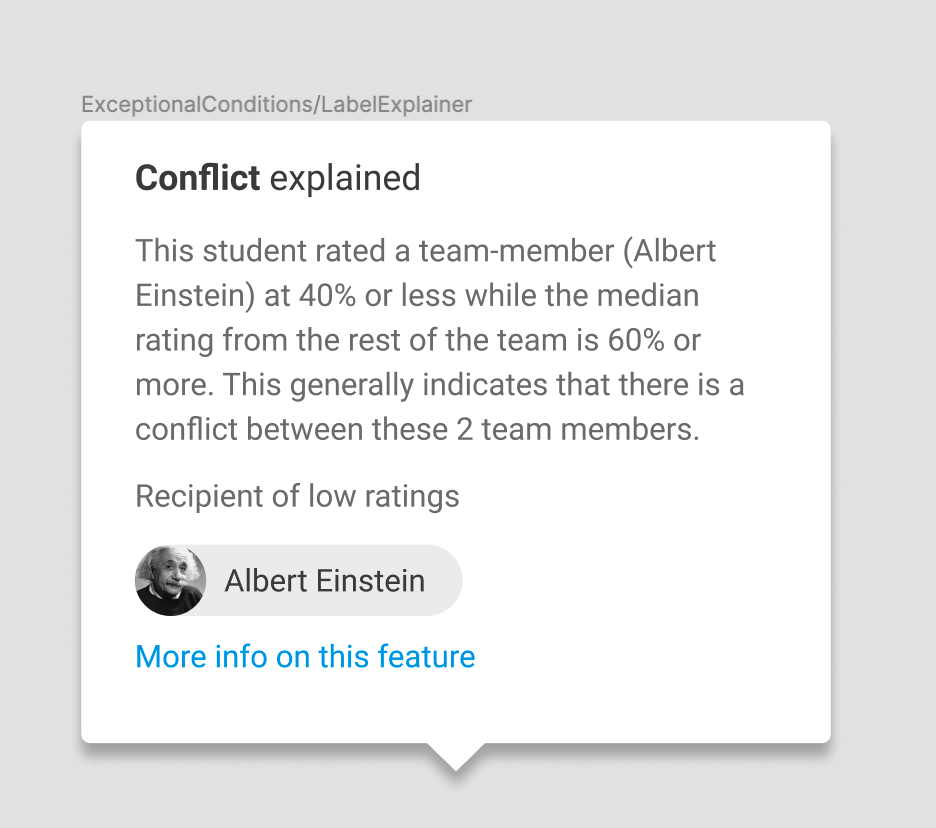 This occurs when a student got rated at 40% or less by one of their team-mates (Marie Curie), while the median rating from the rest of the team is 60% or more. This generally indicates that there is a conflict between 2 team members. 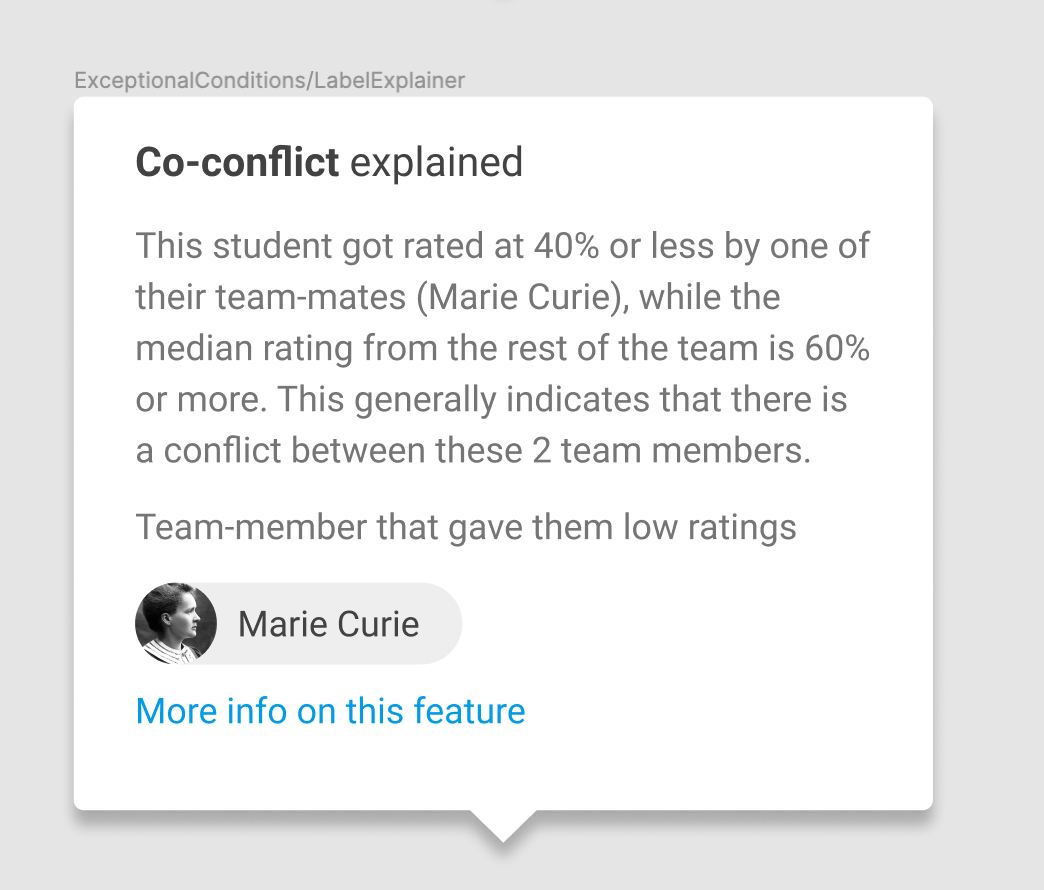 This occurs when it appears the team might have split into two non-cooperating groups, where there’s protective insider rating. This happens when there is significant disagreement between the ratings from various team members (evidenced by standard deviation of the 0-to-1 normalized ratings given by peers being above 0.23).

This feature is heavily inspired by the research of Purdue University, specifically their excellent CATme assessment technique. Pedagogy wise, minor adaptations and reinterpretations were subsequently made by FeedbackFruits based on our experience. The most substantial differences are in the interaction design of our implementation, intended to bring the user-friendliness to the level expected of FeedbackFruits. Also of note is the BuddyCheck.io adaptation of CATme by Shareworks.